That’s the number of days since the last successful terrorist attack on American soil. Pardon me for repeating this earlier post, but it does bear repeating in my opinion.

Tell me you believed that possible on September 12, 2001.

However, there’s that number. Look at it again, and remember how you felt on 9-12. There’s a lot to find fault for in our outgoing President. But his success in keeping our country safe from terrorism is undeniable. You may not like his methods, but it’s impossible to argue with the results. Try and I’ll respond by just repeating that number over and over.

I’ve avoided all of the Presidential “legacy” stuff over the last few weeks. I haven’t read a single post/article about it, nor have I written one. There’s no need. 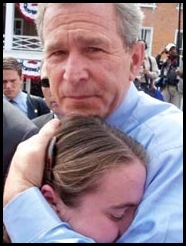 Everyone will remember George W. Bush in their own way. This is how I’ll remember him. This, and 2688 are his legacy. Every other point written about him is at best a distant second.

Did I disagree with him? Often. However, there’s no doubt that the man has shown outstanding character and courage over the last 8 years while dealing with an incredibly difficult job with impossible expectations. He has stuck to his core beliefs, and acted on them. I respect that, even though I disagree with many of his core beliefs. I respect it, because that’s what leadership is all about. Or at least the biggest part. The next biggest part is getting people who disagree with you to buy into your vision. He often failed there. Sometimes spectacularly.

But he fought Congress and the media and an increasingly antagonistic public to pursue terrorists his way, and won his battles with Congress on this issue every single time.

Thank you for that number, Mr. President. It’s time for you to retire back to Texas. You’ve earned the rest.