Remember, I posted just last week about the ongoing efforts of Democrats to shut up people who disagree with them.

Since then we’ve got four more examples. First something from Florida where college students want to ban Limbaugh and Beck. 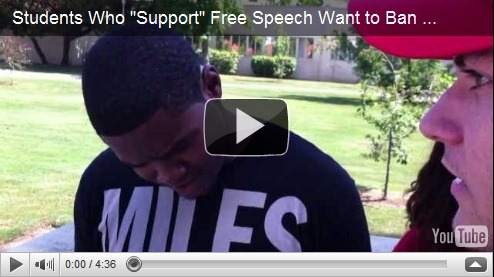 You know, I think Keith Olbermann is a loudmouthed obnoxious idiot. And both O’Reilly and Limbaugh can be just a loudmouthed. Chris Matthews is just a lying hypocrite. But I’d never try to shut any of them up, or take down their advertising, or anything like that.

Not so for Media Matters For America, a supposed media watchdog group, who is really just a propaganda arm for the White House. They’ve started a “Drop Fox” campaign, to punish advertisers on Fox News. Their first target? Orbitz. Orbitz drop kicked MMFA with their response:

"This is a political organization that has been funded pretty extensively to go after one network, and we aren't going to engage in that fight," Orbitz spokesman Brian Hoyt said.

"We have a strict policy of tolerance and non-discrimination, and that means we don't favor one political side over another. Tolerance is a two-way street," he said. "We're going to advertise on conservative TV stations, liberal TV stations and -- if there are any out there -- unbiased news broadcasts."

We haven't bowed to any boycott in the past, and we won't bow to these types of smear campaigns in the future," Hoyt said.

"What they're doing is distorting our record. We don't care about your sexual orientation, religion or gender; we preach tolerance," he said. "Our commitment to the LGBT community should not be at question -- at all."

"This week, Jesse Lee will move from the new media department into a role in the communications department as Director of Progressive Media & Online Response," read an internal memo from Communications Director Dan Pfeiffer, provided to The Huffington Post. "For the last two years, Jesse has often worn two hats working in new media and serving as the White House's liaison with the progressive media and online community. Starting this week, Jesse will take on the second role full time working on outreach, strategy and response."

The post is a new one for this White House. Rapid response has been the purview of the Democratic National Committee (and will continue to be). Lee's hire, however, suggests that a portion of it will now be handled from within the administration. It also signals that the White House will be adopting a more aggressive engagement in the online world in the months ahead.

Actually, this isn’t really new. President Barack Obama’s (D-USA) 2008 campaign had something similar. Remember FightTheSmears.org? It’s still there. Waiting to be ramped up again, I’m sure. They also had Linda Douglass asking people to snitch to the White House about any negative stories about ObamaCare. In fact, as assaults on the First Amendment go, this is pretty tame for Obama.

Still, it’s all part of a pattern. Let’s wrap up the pattern with some research by the appropriately named Media Research Center.

They sent Joe Schoffstall to wander around with a pretend petition to “Ban Conservative Hate Sites”:

"The undersigned hereby adamantly demand that the United States government shut down right wing hate sites. The hate speech propagated by sites like the Drudge Report, Hot Air, Instapundit, Big Government, and others must not be allowed to corrupt our political discourse any longer. These sites are dangerous not only to truth and freedom but also to our society as a whole. BAN THEM NOW!"

If you still think these are isolated incidences, you’re dreaming. It’s all part of a pattern, and the pattern is that liberals want to silence the opposition. That’s what the “Fairness Doctrine” is all about. They know their policies can’t stand up to scrutiny, and know that the only way to continue to remain in power is to limit that scrutiny as much as possible.  These won’t be the last items like this you’ll see. In fact, expect to see significantly more between now and next November. Particularly if things don’t appear to be going in favor of the Democrats.