There’s been a lot of criticism from the right of Speaker John Boehner (R-OH-08). I’ve joined in some of that, but I admit that I’ve been mostly supportive.

In advance of today’s meeting at the White House, here again are the three things Speaker Boehner and Republicans have said all along are needed for President Obama’s debt limit increase to pass the House:

Republicans have repeatedly said any proposal that fails to meet this test is bad for job growth and can’t pass the House. Here’s Speaker Boehner again yesterday: 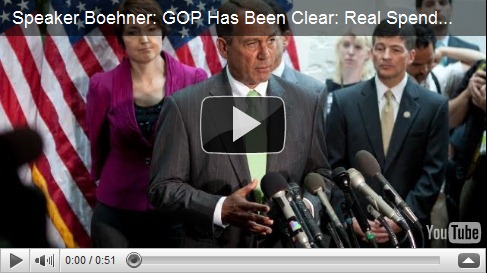 A survey by Resurgent Republic found Americans only support raising the debt limit “in exchange for substantial spending cuts and a commitment to reduce the deficit.” And according to US News & World Report, the American people are against tax hikes “in a big way.” Republicans are standing with the American people.

There are no surprises. As Speaker Boehner told Fox News, if President Obama wants to raise the debt limit, it’s time for him to put a plan on the table that meets these requirements and can pass Congress.