Congressman Paul Ryan (R-WI-01) released this year's version of his Path to Prosperity this week. I give him credit for it, but it's really the work of the House Budget Committee, which he chairs. This will be the starting point for the 2013 budget prepared by the House of Representatives. The Senate is required to prepare their own budget, but they won't. The Senate Majority Leader is a spineless, lying, sniveling coward, who knows that a budget prepared by Democrats would destroy their party.

This year's version shares quite a bit with last year's version. It greatly simplifies the tax code, and cuts the corporate tax rate to 25% (which is still 25% too high, sadly--but at least it's identical to the top marginal rate). And, based upon CBO's conservative growth estimates, it balances the budget around 2040. Which is far too slow, but I'll get back to that later. Obviously, it also assumes pretty much a complete repeal of ObamaCare.

The major differences lie in two areas: Medicare & Medicaid, and dealing with the sequester. The Medicare/Medicaid section is quite a bit different. Not sure if it's better or worse, but different. Ryan clearly understands the heat he & the Republicans took on this issue last year and is trying to address it in a more palatable way. This part is the same as what was released last year and is commonly called the Wyden-Ryan plan for Medicare, co-authored with Senator Ron Wyden (D-OR).

The heart of the Wyden-Ryan plan is to use competitive bidding to allow private insurers to compete with traditional, 1965-vintage fee-for-service Medicare. If you want to learn more about competitive bidding, see this piece I wrote about Mitt Romney’s proposal for Medicare reform. If that doesn’t quench your thirst, you can read the definitive book on competitive bidding:Bring Market Prices to Medicare, by Robert Coulam, Roger Feldman, and Bryan Dowd.

The basic idea behind competitive bidding is that, say, on a county-by-county basis, you let private plans and traditional Medicare offer plans with the same actuarial value compete, to see who can offer the same package of benefits the most efficiently. Each plan in a given county will name a price for which they are willing to offer these services, and seniors are free to pick whichever plan they want. However, the government will only subsidize an amount equal to the bid proposed by the second-cheapest plan. If you want a more expensive plan, you have to pay the difference yourself.

I have some concerns with this, like what happens when private insurers can't compete with an unfunded government plan, but overall, at least Ryan can't be accused of pushing grandma off a cliff. Also, this clearly is an arrow to the heart of IPAB ("death panels"), one of the most offensive parts of ObamaCare.

As for Medicaid, this section appears to be unworkable to me. Funds are fixed based upon an inflation and population index. That assumes that healthcare services remain static. Generally, not only have healthcare services increased in price, but also in quantity. You're offered a lot more healthcare choices today than you were 50 years ago. In other words, there are more opportunities for you to spend your hard earned dollars on healthcare related costs. This is one of the reasons programs like Medicare and Medicaid always expand beyond expectations. It doesn't seem like to me that the Ryan plan would deal with that, leaving further Medicaid burdens on the states. Maybe that's ok. But I know it'll be a criticism from the left.

Finally, the other significant change in the Ryan plan this year is dealing with the sequester. From the actual doc:

Reprioritizing sequester savings to protect the nation’s security:  The defense budget is slated to be cut by $55 billion, or 10 percent, in January of 2013 through the sequester mechanism enacted as part of the Budget Control Act of 2011. This reduction would be on top of the $487 billion in cuts over ten years proposed in President Obama’s budget. This budget eliminates these additional cuts in the defense budget by replacing them with other spending reductions.  Spending restraint is critical, and defense spending needs to be executed with eﬀectiveness and accountability. But government should take care to ensure that spending is prioritized according to the nation’s needs, not treated indiscriminately when it comes to making cuts. The nation has no higher priority than safeguarding the safety and liberty of its citizens from threats at home and abroad.

As an aside, Ryan points out that the entire $400B of "savings" from President Obama's (D-USA) plan comes from shredding the military budget (emphasis mine).

Yet,  the defining characteristic of the President’s new defense posture is a reduction in the administration’s own defense plan from last year, bringing the total reduction to $487 billion over the next ten years. This number stands out as significant for several reasons. In the President’s latest budget proposal, total spending increases by $1.5 trillion and taxes increase by $1.9 trillion, for a total of around $400 billion of deficit reduction over ten years. A clear‐eyed look at the numbers reveals that American taxpayers and the Department of Defense are being asked to bear the entire burden of deficit reduction under the President’s budget.

Overall, as I said last year, the Ryan plan is a good start. But it still has areas that concern me. In no particular order:

Ok, that's the bad news. There's some good news. All of the economic projections are based on low growth estimates from the CBO. That includes the spending vs. GDP projection and the deficit projections. Ryan has released a supplemental document called "The Budgetary Impact of The Path to Prosperity Under Alternative Growth Scenarios". The tax reform and budgetary reform outlined in the plan should act as a giant shot in the arm to the economy. Also, moving towards deficit and debt reduction will make investors less skittish and increase economic investment, which will also boost the economy. Finally, corporations with profits sheltered outside of the U.S. will be allowed to invest this money back in the U.S., further stimulating economic growth.

Currently, U.S. companies have an estimated $1.4 trillion parked offshore and are reluctant to repatriate those funds back home due to the significant taxes that could be incurred under the current U.S. tax system.7 A worldwide tax system essentially locks this money out of the U.S. economy, where – if it were repatriated – it could be used to fund investment, business expansion and job creation in the United States. Policymakers on both sides of the aisle have proposed a temporary repatriation tax holiday in order to give businesses an incentive to send these funds home and put them to work in the U.S. economy. A switch to a territorial tax system would give U.S. businesses a permanent incentive to do exactly that.

This three pronged economic stimulus package (and it actually really would be one), makes the CBO's low growth estimates far too limiting.

A larger and faster-growing economy leads to significantly higher revenue than the base case. This higher amount of revenue, when compared to the spending levels outlined in The Path to Prosperity, leads to a much-improved fiscal path. Assuming higher growth within the range cited above – percentage-point increases of 0.5 (lower-bound AGS), 0.75 (mid-point AGS), and 1.0 (upper-bound AGS) – the budget could achieve balance in the mid-to-early 2020s, with the upper-bound growth assumption producing budget balance within the ten-year budget window – much sooner than CBO’s estimated balance date of 2039.

In the spirit of a picture painting a trillion words, see below. The red line is the President's "plan". Based on his plan, you can expect total economic collapse sometime between 2030 and 2050. By "total economic collapse", I mean that you should consider an event like the Great Depression as a best case scenario. 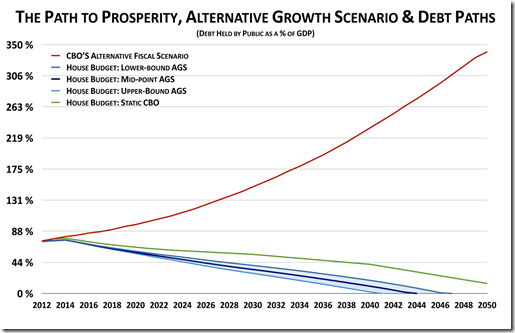 I have a couple more posts on this plan coming up. I think they'll be a bit shorter. I want to hit a couple sections of the document and point them out specifically, as I think Ryan makes some incredibly important points that aren't being made elsewhere, or at least aren't being made loud enough.