Yes, you read that right. For the first time in two years, thinking about Fast & Furious is bringing a smile to my face, rather than raising my blood pressure.

I have said all along that this scandal is bigger than Watergate. And it has infuriated me to no end that it’s been continually brushed under the rug and ignored by the MSM. Attorney General Eric Holder’s stonewalling, lying, and obfuscation over the issue has been making me pull my hair out. As has the long slow slog by Congress to proceed with contempt charges against Mr. Holder.

So, why am I happy today?

President Barack Obama (D-USA) has officially involved himself in this mess now. By asserting executive privilege on the subpoenaed documents, he now owns it. Obama’s ace in the hole this entire time has been that the lapdog media is willing to cover for him. To say that they have not pursued this topic with any diligence is the understatement of the year. NBC Nightly News first mention ever of the scandal was on June 12, 2012! For those keeping score, that’s a mere 545 days after the murder of border patrol agent Brian Terry.

But now, with contempt charges looming against the U.S. Attorney General, and with Obama’s assertion of executive privilege, it will be much harder for the MSM to ignore. We’ve been told for months now that Fast & Furious was a regional program, and that no one at the White House or the upper echelons of the Department of Justice really knew anything about it. That’s been obviously false for some time, but that hasn’t kept Holder from repeating it. But the assertion of executive privilege makes it more difficult for Holder now. If Holder’s been telling the truth, executive privilege wouldn’t be necessary, and in fact, wouldn’t even apply.

This is a big, big problem for Holder and Obama now. And while we still have a lapdog media, there are a few that still try to do their jobs. There are more still that may be biased, but also will smell blood in the water. Another of the many infuriating pieces of this whole story is how Holder and the DoJ have shut down access to the people with firsthand knowledge. You can do that merely by preventing them from appearing before Congressional inquiries, but only if there are no (or few) nosy reporters poking around. 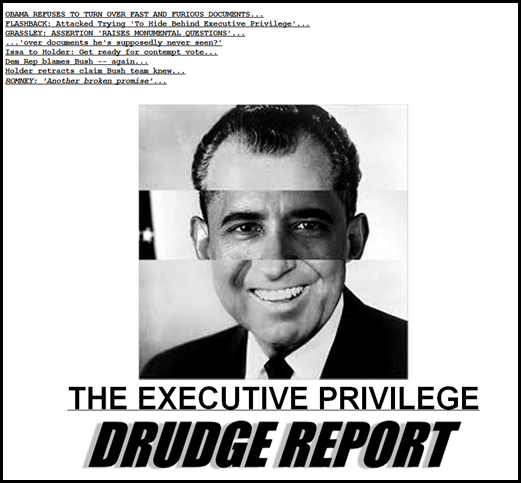 President Obama today just made Fast & Furious a legitimate election issue. It may turn out to be the second biggest issue after the economy. I couldn’t be happier.